Reflections on the passing of a beautiful muse

“Don’t cry because it’s over, smile because it happened!” Dr. Seuss
(In Memory of sweet muse Amberlin who was taken from this world much too early)

Just after returning home from a wonderful dinner and catch-up session with a friend on October 5th, I learned from Facebook that Steve Jobs had passed. I read with interest posts about his life, quotes from memorable speeches, and from the amount of people posting all over the web and social networks, could sense how much of an impact he and his life must have had on countless millions. I mourned his passing-the loss of a pioneer, a world innovator, and imagineer as I considered him-as I grieved for Amy Winehouse when I learned of her passing-sad, tragic in Amy’s case, but very removed. As I flipped around Facebook into my personal profile posts, I read something on a high school friend’s post about a personal and childhood friend of mine that caused me to read more-something along the lines of “how do I live without my best friend? I miss you already.”

First impression was that my friend Amberlin had moved, and must have moved far away from her best friend Amber, who I was also in touch with on Facebook, but as I read more posts on Amber’s page, I came to the one that nearly stopped my heart: RIP Amberlin. Here I was mourning the passing of Steve Jobs-reposting his photo and a particular quote that struck me; someone I didn’t ever know-while my childhood friend had suddenly passed away at 39. I just wouldn’t accept it. I didn’t want to accept it. Amberlin was my muse and my light for the past few years as she had fought tirelessly, courageously for 15 years against what some consider an invisible disease-Chronic Fatigue Syndrome and ME. It wasn’t invisible to her. She lived daily with constant reminders. She was constantly posting on her blog and facebook information about CFS to educate others, to raise awareness to the cause-to make CFS less invisible. And when she wasn’t fighting her own disease, she turned to art. She painted; she made jewelry; she surrounded herself with things she loved such as chickens and nature. She was a light in her community and to all those she touched. 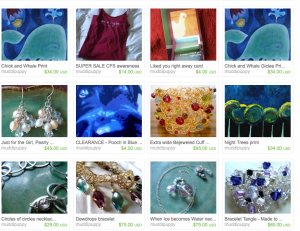 Some of Amberlin's Art on Etsy

I don’t know what I was expecting to find when I went to her facebook page just upon learning of her passing. Something that would clear up the confusion in my head and heart? Show that she was alive and thriving more than ever before, continuing her battle? What I did find was a page overflowing with tributes, emotional outpourings of love through words, photos, blog posts, videos… I think about that and realize that’s what we have to give. It can’t bring her back, but it’s what we can do to help each other celebrate her life, to help her family, to let everyone know just what an amazing beautiful light Amberlin was. To reach out and connect with those who connected with Amberlin. I found reading others’ posts to be wonderful, and it kept me in a continuous flow of tears for a few days. I saw quickly what kind of an impact Amberlin had had on all of the people 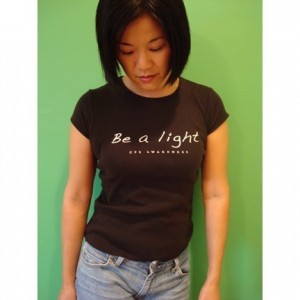 she touched-from childhood through adulthood-and people from every phase of her life were stopping by to share how Amberlin had touched them. How beautiful that a simple and often frivolous thing like Facebook could be the one place everyone could come together to share their stories, mourn her loss and connect with others who Amberlin had also touched.

Her passing hit me particularly hard. Until you experience something directly, like the passing of a friend, you never know how you are going to react. I was surprised at how heavy my heart was for days after learning she passed. I found that I wanted to connect with other friends who also knew Amberlin. I wanted to better understand how she died. My head wanted desperately to make sense of what my heart wouldn’t accept. 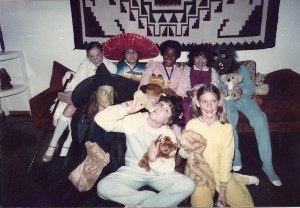 Amberlin and I became friends in 6th grade in 1983. When my family moved from Arizona to California, she was one of the first friends I made in California, along with the wonderful friends in this picture-many of us still connected through Facebook! I recall fond memories of her birthday scavenger hunt or her playing piano at her house, or her at my halloween party. in 6th grade (I’m in blue footy pajamas wearing a mask next to Amberlin top row). We went to elementary, junior high and high school together. Amberlin and I last reconnected a few years ago thanks to Facebook. I learned of her struggle and she of mine, and we reached out to each other. She told me how amazed she was at how similar some of our experiences dealing with chronic illness were. A few years ago I purchased a Be A Light shirt to support her and CFS. Earlier this year we traded some crafts and music-she sent me this whimsical canvas painting 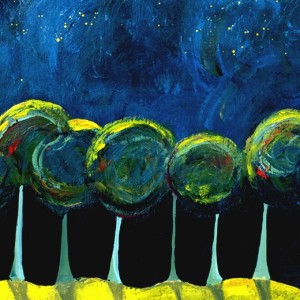 she had made, and I sent her my Aoede t-shirt and Push and Pull cd:

Her passing stirred a lot of different emotions in me I wasn’t prepared to feel: first, my heart was so heavy, and I was in denial. She was so young, and I felt like life was taken from her at 39 much much too soon. Could she really be finished with her life’s purpose at 39? Second, she was my friend and peer, and I just wasn’t prepared to lose someone who I knew so long ago, once shared many memories with, and was reconnected with today. Her Facebook page was covered with posts from all the friends from high school and even earlier. Seeing that outpour of feelings and reading the names, some people I recently reconnected with at our high school reunion July 2010, some I haven’t thought about for years, others who I regularly keep in touch with on Facebook, was both nostalgic and surreal. Could I really be at the age when my friends were dying? I’m 38. It doesn’t seem real. Amberlin shared my half birthday when she turned 39 June 27th.

Third, I am battling my own illness: DM. When I watched the video below of Amberlin and her friend dealing with CFS, I cried not only because I mourned for my friend, all her suffering, but also because I saw myself through the experiences of these girls as well. Amberlin was my muse and my light. I saw that despite her struggles she strived for the best quality of life and was a light in the darkness for so many she met along her lifepath.. Your muse isn’t supposed to die. For me Amberlin represented hope. While she was alive there was just that much more hope for finding a cure for CFS, hope for her to live in peace with her disease instead of fight with it-for her life. I think for me, it was also this: That if she could fight so courageously for so many years while her body was in pain and struggling, while she was in and out of hospitals, treatments, trials, raising awareness, connecting to others in her community, so could I. There would be hope for me dealing with a rare chronic disease too. Her passing though didn’t extinguish the light. I believe the light shines brighter and brighter with each connection, each time her story is told, for her message in life: Be A Light will continue to spread.

It was only in February of this year that I went “public” with my condition. Even as early as Jan 2009, I was worried about sharing my health issues publicly-In my online journal I wrote: “Maybe I am keeping this secret from my fans because I don’t want to share this vulnerability and don’t want to risk some or other artist thinking, ‘I won’t ask her to do a gig-she’s sick an unable to rise to the occasion.'” Here’s what’s wild: when I did go “public,” start blogging and engaging with people, it’s as if I started attracting the very people who needed the light; some people also struggling with DM, wanting to share their stories, but also others! And I keep asking how I can give back-give to all of those who have helped and supported me in my time of need? The universe seems to be responding, and one message is pay it forward. Telling my story and performing at the Myositis Conference in Vegas in September is one such way. Sometimes it takes the form of a song sparked by someone’s story or a personal event. Other times just a cheerful message letting someone know you are thinking of them, that you care, that you want to help or simply that you understand, because you are going through it too.

“May you use this illness
As a lantern to illuminate
The new qualities that will emerge in you.”
-John o’donahue