02 MarBehind the Scenes of I Lost, You Win: The Video That Just Wasn’t Meant to be…

Putting together the behind the scenes footage for “I Lost, You Win” immediately transported me back in time to the location of the initial shoot: Nicasio, California. Nicasio is north of San Francisco and in unincorporated Marin County, and that was half the fun… and all the battle.

It was late D

ecember 2007, just before the holidays, and I awoke Saturday morning bursting with excitement to have a crew of folks to help realize my vision of making my first music video for my (as of then unreleased) single, “I Lost, You Win,” from my newly mixed, first full length album, Push and Pull (2008).

My partner in crime and life, Dave, and I had seen some of the video footage of the location and had an idea of the script and scenes. It was simple enough on paper, and involved filming under a cool oak tree, a girl, me-starring as a muse figure, a wedding dress lit up in the tree, and band footage. I think the central theme implied by the script could be the struggle between staying a child and becoming an adult.

So what could possibly go wrong?

Each of the crew and cast drove out to where the written directions said to go…this included among others, my now sister-in-law, Helen, who had volunteered to help with costumes; my drummer, John Walden equipped with full drums in his truck; Dave with gear, food, and umpteen other essentials in his truck; me in my small and sporty Honda Del Sol; and other assorted crew and cast. Having followed the directions best we could, we nonetheless all found our separate cars strangely turning into the same parking lot behind a church miles away from said location…none of us could find the location! Thanks to cell phone coverage in one spot, we reunited with our bandleader at the church, and all followed her through the foggy and soggy hills, and to the turn we had all missed, climbing a steep and twisty road…it was nearing 3 pm by this point!

The first point were told to stop was at the bottom of a steep hill, adjacent to a washed out, jagged and crumbling dirt road that couldn’t support vehicles. Foot soldiers were ordered to scope it out and find the idyllic location: the beloved oak tree.

When we finally stopped at the top of said hill, evident when we had to use, check and re-check emergency brakes and curb wheels, we were informed that the location was about ¼ mile down a winding foot path, that would take us to our beloved tree…a foot path that could not support any of our trucks orcars that we assumed would drive us directly to the location where we could unload …

The property and scenery were beautiful, picturesque and a perfect backdrop for the shoot… but how would we get us? all our gear? John’s drum set? to this idyllic spot?

One slow and back breaking trip at a time as it turned out..and it was already nearing 4pm.

John and his drums made an expert decision to go home…there was no way that he could cart his rig ¼ mile (or more), and since it was already after 4pm, likelihood was we wouldn’t be shooting band footage til the next day anyways…

It was getting dark. Cables had to be laid down. Multiple people had to work together to carry a 300-lb generator down the ¼ mile path across a chasm to our beloved tree. Lighting had to be set up. Each scene needed to be ready for shooting, or at the very least, the first scene… And meanwhile, while the guys and our bandleader mostly did all the schlepping and heavy lifting, the girls and I were already freezing and keeping warm in cars up above the location…it was probably 5pm…

I remember not being happy with the location or direction and with having to send John home, and realizing we wouldn’t get band footage. I recall expressing frustration to said bandleader, which I’m sure just added to the tension and mistrust during the day.

Finally, hours later, after waiting around, and after the girls and I went into Nicasio to eat and use the restaurant for staging and to stay warm as long as we could (since we couldn’t see in the dark to put on makeup and couldn’t change into costumes easily in our cars), we were told they were ready to shoot. It was probably 8:30 pm…

Did I tell you it was cold?? If I told you I was wearing 2 of my heaviest long winter jackets on top of my costume, on top of my jeans, on top of long underwear and 2 pairs of socks, hat, scarf, gloves, and hiking boots, and that I was still chilled to the bone, would that accurately paint the picture? And that I had to strip for the shots down to the costume? 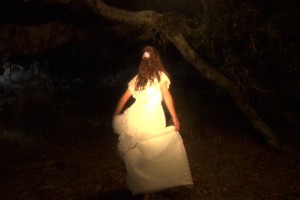 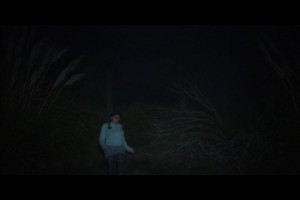 By 1 am, I had to leave. My body had no choice. The positive was we had achieved and to my knowledge had “in the can” a moon shot, a girl running repeatedly down a hill, a lit white dress in a tree and said girl spinning. In my estimation, this equated to maybe a minute or less of footage for our music video for at least 5 hours of shooting time. 98% was of the girl. Thanks to Dave’s smarts and schlepping a heater and portable stove, we also had hot liquid to imbibe when we weren’t getting “the shot.” When I left after 1am, I can only assume the girl was tired of running down the hill and spinning, and chilled to the bone in her girl clothes costume…while the rest of crew had to schlep some of the night’s “stuff” back up ¼ of a mile path back to cars, drive home and prepare to do it all again the next day.

Success? I’ll let you be the judge based on what transpired on Day 2…

(CLICK TO WATCH “I Lost, You Win” the video)

behind the scenes, i lost you win, push and pull, video