When last we left off, I was just about to dive in head first to the world of natural and alternative therapies in December 2008… I had convinced myself that I could heal myself without taking more toxic drugs. I had already adopted a better, low inflammation diet, and even tried a few sessions of acupuncture and personal massage. My purple skin rash; however, was more active than ever and had spread to my arms, chest, elbows, legs and feet, and I was getting weaker. I of course, being as stubborn as I I am, downplayed pain and weakness to myself and my loved ones and kept throwing myself at life. While getting massage, I couldn’t even hold my arms up on the table and everything was so tender to the touch the therapist had to be extra gentle because I would wince. I even remember one therapist slipping me a card with the name of a Chinese medicine doctor on it who allegedly could help me, because the therapist could feel my weakness. I was wiped out even from massage! So when I learned about Immune Matrix from a family friend and doctor, I thought why not give this a shot. They focused on a whole systems approach; not on treating symptoms or immune suppression.

My first evaluation consisted of a clinician drawing some of my blood from my fingertip, hooking me up to a computer and exposing me and my blood to all sorts of vials containing what I understood to be the energetic signals for antigens in a liquid-anything from systems and

organs, amino acids, sugars, molds, viruses-to the whole spectrum of foods. In essence, I became part of a circuit, as one hand held a wet wand and touched vials while the other was being tapped with another wand on what I presumed to be an acupressure point, to determine how my body would react to each antigen. I recall feeling a little jittery as I was exposed to more and more vials, but no long term side effects. My mom and Dave, my husband, were with me for support. (They actually tested Dave to see whether I was reacting to him! Thankfully, no!) I also remember getting three overall scores that corresponded to my level of toxicity (very toxic), my drainage-meaning my ability for my body to rid wastes and other toxins (very limited ability), and my ability to absorb nutrients (also very low ability). I also received a full report detailing each of the findings that the super computer spit out, such as a whole list of foods to avoid, or which systems and organs were affected, or to which internal pathways or processes my body “reacted and required treatment.” I was given homeopathic liver drainage formula to detox, other homeopathic remedies and supplements; told to do a strict anti-elimination diet, and to return for “treatments” over the next few months.

As a scientist needing to understand how and why things work, I couldn’t wrap my head around energetic signals of substances let alone the allergy elimination treatments. I remember going in for “treatments,” which again consisted of a clinician hooking me up to the computer and asking me to touch a bunch of vials in a panel (e.g., Bacteria or Wheat panel) to see if I reacted energetically to those substances. Those I reacted to (a lot of them it always seemed) were all placed jumbled together in a glass vase or jar. After the clinician manipulated a bunch of stuff on the computer to boost good processes and pathways and create a personal remedy, and determined that my brain could handle the treatment, she sent me to a room. The clinician would then ask me to do a series of different breathing techniques and tap my

spine with the remedy vial to “reset” my nervous and immune system’s response (so they didn’t react anymore to these particular antigens). Lastly, I would lay down and hold the vase with all its contents for about 15 minutes…it all felt like voodoo. How could this possibly work?

Over the months I received treatments, my skepticism gradually lessened over the ideas that: (1) everything has a unique energy signal; (2) my body would know whether it had affinity or sensitivity to each antigen instantly; and (3) energetic treatments could help, when I saw my own body reacting or not reacting-instantly-to all the antigens to which it was exposed. How could it possibly know? It was sort of like kinesiology to test my body’s strength but with computers and strange clear vials…and voodoo!! 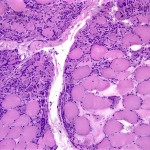 In January 2009, I had a muscle biopsy (ouch) that “really confirmed” the DM diagnosis through muscle pathology. DM has a particular pathology that is different from other types of myositis such as polymyositis (muscle disease). It wasn’t enough that docs had confirmation from skin biopsy, MRI, EMG and strength tests? I will say, I wanted to be darn sure of this diagnosis before risking long term treatments. There are some people with DM that, like me, don’t show active DM through some of the blood work. Many of the levels they test monthly like muscle enzymes CPK (creatine phosphokinase) remained normal for me despite weakness and skin rash.

Between January and April 2009, my skin rash continued. My muscles continued to be weak. I had lost weight and muscle mass. I seemed to be seeing my rheumatologist more and more. I was getting monthly blood work, being screened for cancer (DM also has a higher incidence of cancers with it), and doing physical therapy (mostly home-based). But at least I was becoming less toxic, was absorbing vitamins and minerals and some foods better, and draining better. I’m sure many substances that used to be triggers for inflammation and possible autoimmune reaction in my body were also lessened or in some cases removed. So I can’t say that the immune matrix treatments and detoxing didn’t help! They just didn’t slow or stop the disease progression on their own. Remember, I was still taking low dose steroids and had an elimination diet at this point so it was hard to isolate what might have been working.

Come April 2009, after my rheumatologist was pleading me to start the drugs, I got a second opinion from a Stanford Dermatologist specializing in D

M. He convinced me that left on its own, and considering how active my DM was, this disease could leave me bedridden or worse due to muscle wasting and uncontrolled inflammation. I finally agreed to start immuno-suppressive treatment: methotrexate.

I kept working once I started the drugs, which I took once a week, but I started working more and more from home and noticed things like commuting by public transit was getting really difficult. I discovered I was incredibly fatigued all the time, especially the days after taking the drugs-never feeling rested despite sleep. My hair was falling out too.

Despite my health issues, on the music front, there were some positive musical milestones: “I Lost, You Win” was featured on American Airlines, Aoede was WomensRadio’s Top Artist for 2008, and Push and Pull was being distributed in stores, added to radio stations nationwide and getting great reviews. I just checked and discovered we played 10 shows from Jan-March 2009. We went to Nashville for an industry showcase in April. We shot the remainder of the music video on one day in July. We played or scheduled 21 shows from May-December…that was a LOT of gigs that required energy. Energy that I was running out of… like driving from San Francisco to Santa Rosa for a 2 1/2 hour gig and then driving home, twice! In addition, we went on a family cruise in March and flew to New York for a wedding in June!

My husband Dave and I went down to Los Angeles, CA in June for a music strategies workshop. I remember sleeping on the hotel lobby couch at the workshop after taking my drugs. I recall canceling gigs just after I took leave from work in July 2009 because on immuno-suppressives, I just couldn’t get through the days anymore without extreme depletion, fatigue, brain fog, and then the fun of being on immuno-suppressives… infections because the immune system is-you got it-so suppressed! It was getting harder and harder for me to be in the public. Even being at home, once I took leave from work, I was still getting multiple respiratory infections, which can be a risk being on all of these drugs. I envisioned just taking a month, maybe two off from work. I would give myself time to rest and adjust to the meds without all the stress on my body each day.

How long do you suppose I was on leave from work?